Soft, buttery bread with an apple cinnamon filling. My take on the classic Jewish bread/cake with a warm spiced filling.

Apple cinnamon is probably one of my favourite flavour combinations in the world. There is something about the flavours that feel so warm and comforting, and I feel like it’s one of those flavours that never really go wrong. Everyone loves a good apple cinnamon muffin!

I have to admit I had a bit of an apple cinnamon muffin obsession last year… 3 muffins a week is okay right?

Anyway, this recipe isn’t even muffins, its something better...

Some people might be unfamiliar with what babka is. Essentially it is traditional jewish cake made from a slightly dense yeast based dough, lathered with some sort of filling. In the past few years I’ve been seeing a lot of chocolate babka’s pop up, and they look amazing…. but why not fill it with something else! (If you’re not a fan of apple cinnamon, feel free to replace the filling with a chocolate spread like Nutella!)

I’ve adapted the dough recipe from Jerusalem: A Cookbook by Yotam Ottolenghi and Sami Tamimi. The dough is enriched with butter, a little similar to a brioche, and it is so good… I’ve done a deep search of babka recipes and there seems to be a general consensus that Ottolenghi and Tamimi have the best babka recipe, so why would I use anything else!

If I was to describe what this tastes like, I’d say its like a more sophisticated older sibling of an apple cinnamon roll, the enriched dough gives the bread a richer taste and it doesn’t pale in comparison. Give it a go and let me know what you think, it might be a lot more effort, but it’s better than any bread you will buy from the bakery!

When it comes to making bread there are a couple of things to keep in mind that will give you the softest texture!

The most important part of making bread is in the kneading of the dough. If the dough is not kneaded enough there won't be enough structure for the bread to rise.

Babka is an enriched dough, meaning there is a substantial amount of egg and butter added to the dough. This gives the bread a richer taste and texture. However it is important to knead the dough enough in between the additions of egg and butter. It makes it a lot easier to knead with a stand mixer, however it isn't impossible by hand!

The first knead will be with flour, sugar, yeast, water and eggs. Make sure you knead on the stand mixer for 5-10 minutes. The dough will be very rough at first, but as you knead it will become softer and smoother. At this point you can add the butter 1 tablespoon at a time. At first the butter might not want to incorporate into the dough. However keep kneading and the dough will slowly absorb the butter and become a silky smooth and elastic dough.

The trick is to knead until the dough can pass the windowpane test. If you stretch the dough between three finger you will be able to form a paper thin sheet of dough that passes light like a windowpane. Once you can form this without tearing then your dough is ready for proofing!

To achieve the signature swirls in a loaf of babka you need to intertwine the dough into a braid. Here are a couple of tips to help make it easier!

Making an apple cinnamon babka might be a little more difficult that say a chocolate filled one as there are chunks of apple in the dough that are prone to falling out.

It's okay if pieces of apple fall out as you complete this process. You can always tuck them back in!

This was one of the first recipes up on my websites and still one of my favourites. It's such a warm and comforting breakfast or snack. I've updated the recipes, method as well as the tips to help you create an even better babka.

If you liked the recipe make sure to leave me a comment and rating below! I've seen a couple of these on instagram already and can't wait to see some more, just tag me @catherine.justdessertsau and hashtag #cattycakes so I can find and share your creations! Thank you so much for stopping by and until next time... happy baking!! 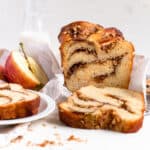 Soft, buttery bread with an apple cinnamon filling. My take on the classic Jewish bread/cake with a warm spiced filling.