The softest and fluffiest cinnamon buns hinted with early grey and topped with a sweet earl grey glaze. These sweet buns filled with warm cinnamon spice and bergamot are the perfect version of the cinnamon roll.

The Golden Ratio of Baking

When it comes to baking there is always a golden ratio. The perfect combination of ingredients. Through experimentation most bakers will come up with a recipe that only differs slightly from each other, and that’s what I look for when developing recipes! So after DAYS of analysis, experimentation and a little tweaking I have finally found my perfect cinnamon roll ❤️

This recipe has elements of brioche, giving it an extra richness that goes amazingly with the cinnamon, whilst also having an extra fluffiness from a secret ingredient!

There are a couple of tips you guys should keep in mind to bring your earl grey cinnamon rolls to another level! These tips will give you perfect, fluffy, swirly cinnamon rolls.

As you know when it comes to me it can’t just be a normal cinnamon roll, and so what better way to up the classic than with a little earl grey. The floral bitterness of the tea contrasts the sweetness of the roll and just adds that extra oomph. Trust me, once you make this, all your cinnamon rolls will have earl grey!

Now I can safely say that my life goal is complete. The perfect cinnamon roll (at least for me 😆). I hope you all enjoy this recipe as much as I do and create some amazing cinnamon rolls! If you do make this recipe make sure to tag me on instagram @catherine.justdessertsau and hashtag #cattycakes so I can see all your amazing creations.

One more thing, I just wanted to give a HUGE thank you to all of you that purchased my ebook! It really means so much to me and I hope it keeps you company on your macaron adventures. Until next time… happy baking! 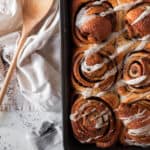 The softest and fluffiest cinnamon buns hinted with early grey and topped with a sweet earl grey glaze. These sweet buns filled with warm cinnamon spice and bergamot are the perfect version of the cinnamon roll.

* An easy way to slice the rolls without damaging the cinnamon swirl is using toothfloss!

** This keeps them soft and moist

« E-Book Release! How to PERFECT Macarons: A Guide
No-Churn Pistachio and Strawberry Ice-Cream »