Yes, I know it is far from pumpkin season, especially here in Australia, and it is definitely not halloween again… But I had to make a pumpkin cake for my friend’s birthday, who we call “pumpkin”.

I’ve adapted this recipe from Life, Love and Sugar, an amazing blog for classic baked cakes and cookies. If thats the kind of thing you are looking for I recommend checking her blog out!

This cake is a little different to the normal pumpkin cakes covered with a super sweet cream cheese frosting, instead it is made with a whipped cream flavoured with cream cheese and a little cinnamon. It’s much lighter, less sweet and a lot better! (And for those looking to cut down sugar, this probably has less than a third of the powdered sugar used in traditional cream cheese frosting). According to my friend it reminds her of a chai latte, I guess you can make it and find out. I hope you all enjoy the first recipe I’m sharing, and let me know what you think!

* Made an edit to include cup measurements 🙂 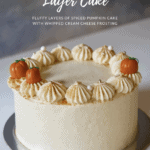 *I made my own pumpkin puree, although if you have canned pumpkin puree available you can also use that. To make it I skinned and chopped up some pumpkin into small cubes (about 270g), placed in a bowl, covered in cling wrap, leaving a small hole, and microwaved on high for 5 minutes. Once soft I blended the pumpkin in a food processor until smooth and let cool.

**To decorate I made some small fondant pumpkins. Using orange fondant I rolled a few small balls and used tooth-floss to create small ridges that resemble a pumpkin. I then used some green fondant to make stems and vines. NOTE: these should be placed on when serving as they will absorb moisture from the frosting and bleed/ slide off if placed on earlier.