Tart rhubarb and raspberry cremeux, light sour cream mousse and pear compote all encased in a buttery tart shell. An adaptation of my my dessert from the grand final of Zumbo's Just Desserts Season 2.

Rhubarb, raspberry and pear… sound like a familiar flavour combination? That’s because it was one of the flavour combinations of my grand final dish! I had so many requests to share the recipe for my grand final dessert, but I can’t actually share the full recipe because of copyright restrictions….That’s why I decided to take a few of the components to create a tart that you could recreate at home. This tart is a recreation one of the two rings in my final dish and it is one of my favourite tarts ever, partly because it was what I created in the grand final, but also because is just tastes so good!

Since we are on the topic of the grand final I thought why not share a little about it, I mean it was the biggest cook of my life so far. There was so much that happened during that cook, and i’d say less than a 10th of everything that happened was really shown. There is only so much you can show within an hour episode! I think one thing that I wish was shown more was the complexity of my dish. With 11 different components, two ice-creams and a tempered chocolate flower, I think I did a pretty good job. I didn’t manage to get all three rings in, but I didn’t miss any of the flavours I wanted to include originally and gave my 100% 😀

I’ve read a lot of people’s opinions, but one thing that I hope everyone can recognise is the effort that I put into that final cook. It was a window of opportunity for me to pursue my dreams and prove to myself that I could really create a career for myself out of desserts. And… because of those efforts I’m here today sharing my recipes, creating desserts and paving the road to my dream career!

To all those people that are constantly supporting my recipes, videos, blog posts, giving me feedback and showing me endless amounts of love I am so so so grateful, it really means everything to me. I couldn’t be doing any of this without the support I’ve received and I just wanted to say thank you so much <3

Returning to the recipe… after typing it all up I can see why this tart may be a little intimidating to make. The steps do go on and on… but that being said it’s only an eighth of the original, so hopefully I don’t scare too many of you off! And I promise that the end result will be entirely worth it 🙂

If you do make this recipe make sure to tag me on instagram @catherine.justdessertau and hashtag #cattycakes so I can find and share your creations. The best part of my day is always receiving pictures and messages about your recreations, and I can’t wait to see more! Happy baking!

EDIT: Because I got a few requests for the neutral glaze recipe I used I’m attaching it below! 🙂 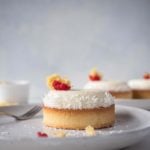 Tart rhubarb and raspberry cremeux, light sour cream mousse and pear compote all encased in a buttery tart shell. An adaptation of my my dessert from the grand final of Zumbo's Just Desserts Season 2.

*You can use store bought neutral glaze or make your own, let me know if you would like my recipe!

**Made in the microwave using a cream siphon, I used this recipe (https://www.gastronomixs.com/en/components/basic-sponge-cake)

*This recipe makes quite a lot, I use about a quarter for this recipe. The rest you can place in a container and freeze until needed next!