Soft and fluffy lychee infused cupcakes with a silky lychee and rose Italian meringue buttercream. These cupcakes are pretty, pink and full of delicious lychee flavour.

With Mother's day coming up I wanted to create something pink and pretty for all the mums (or moms) out there! These cupcakes are soft and fluffy with a lychee centre and a light and creamy Italian meringue buttercream. I asked what kind of recipes you guys wanted to see and cupcakes were right up there, so I thought this would be the perfect time to bring these out! There is something about the fruity and fragrant combination of lychee and rose that works incredible in desserts, so here it is!

Like with all cakes it is important to be gentle with your batter. Over-mixing causes gluten to form- in other words you will get dense and chewy cupcakes. If you've ever had a cupcake that is dense or rock hard over-mixing is usually the culprit.

This recipe mixes the flour into the batter in two additions. Doing this helps evenly distribute the flour to create a light and fluffy cupcake. When mixing each addition make sure to either fold gently with a wooden spoon/spatula or in short bursts with your stand mixer.

Overfilling your cupcake patties is what causes excessive doming. This can lead to rounded and cracked tops, or just an overflow of batter while baking. The batter from this recipe should distribute perfectly between 12 cupcakes patties. However, if in doubt don't fill above ¾ of the way. That way your cupcakes will rise up to the top while baking without any problems!

The only problem with Italian meringue buttercream is that it's finicky. It requires the cooking of a sugar syrup to create a strong meringue before beating with butter. The result is worth it I promise!

Once you have created a strong meringue with the lychee syrup it is important to cool it to room temperature. If the meringue isn't cooled enough it can cause the butter to melt when added.

If you add the butter and find that the meringue wasn't cooled enough it is possible to save your buttercream by placing it in the fridge for 30 minutes - 1 hour before continuing to beat for 5-10 minutes. The butter will look curdled, but it will comes together after beating.

Fresh lychees are not available to everyone around the world, but canned lychees are pretty much available anywhere. Not only is it easier to find, they are also peeled and pitted so it's easier to work with!

I use the fruit of the lychee, but it's the syrup in the can that I use to create that sweet lychee flavour. Because the lychees have been sitting in it, it has absorbed all that delicious flavour and will help you create moist and delicious cupcakes.

I hope that I've given you enough tips to go and nail those cupcakes. If you have any questions leave a comment down below and I'll get to it as fast as I can. And if you end up making these cupcakes leave me a comment on how they went and a rating! Would love to hear all about them. You can also show me your baking success on instagram @catherine.justdessertsau and hashtag #cattycakes if you post your creations. Thanks for stopping by and until next time... happy cupcaking! 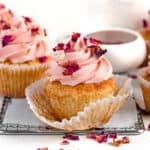 Soft and fluffy lychee infused cupcakes with a silky lychee and rose Italian meringue buttercream. These cupcakes are pretty, pink and full of delicious lychee flavour.