These black forest cupcakes are my rendition of the popular Black Forest cake, a delicious chocolate and cherry cake originating in Germany. This super fluffy chocolate cupcake is filled with cherries macerated in kirsch, or rum, and sugar for a sweet and juicy filling. To make these even better they are topped with a swirl of vanilla whipped cream and chocolate shavings to create the perfect bite.

These cupcakes are perfect to celebrate the fresh cherries that are available in Australia now, if you don't have fresh cherries available where you are in the world feel free to use maraschino cherries. Black forest cakes are originally made with those, so it won't feel unfamiliar at all!

What is a black forest cake?

Originating from Germany, this cake, aka Schwarzwälder Kirschtorte, was named after the alcohol Schwarzwälder Kirschwasser. This liquor is made from distilled cherries in the Black Forest mountain range of Germany and gives the cake its distinctive flavour and name! Of course, this liquor may not be as available in your part of the world, so rum works perfectly too. If you are making this for children feel free to leave out the alcohol altogether and use a splash of vanilla extract instead.

The ingredients needed to make these black forest cupcakes are super simple! If you can get your hands on some Kirsh they would make these the perfect black forest recreation, but rum works perfectly too.

Tips on the perfect cupcakes

A couple of tips for you to create the perfect black forest cupcakes!

Can I make these in advance?

Yes, you can definitely make these the day before and they will hold up perfectly!

How long can these be stored?

These can be stored for up to 3 days. However, they won't last as long as they are iced with whipped cream. Make sure you keep them in an airtight container.

Do these keep at room temperature?

These don't keep very well at room temperature as they are iced with whipped cream. Leave these in the fridge until they are just about to be served. They'll keep for about an hour in cool weather, but I can't guarantee when it's warmer!

Do I have to use alcohol?

Nope! If you don't like alcohol, or if these are for kids, replace it with a splash of vanilla extract for a little extra flavour.

If you make these black forest cupcakes make sure to leave me a comment and rating down below, I would love to hear how it went.

Also don't forget to tag me on instagram @catherine.justdessertsau and hashtag #cattycakes so I can see and share your desserts! 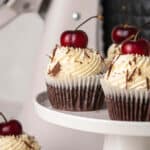 Light and fluffy chocolate cupcakes filled with macerated cherries and topped with a swirl of vanilla whipped cream and chocolate shavings.