If you are looking for a fun, squishy and delicious chocolate covered dessert you have come to the right place. These are a homemade version of the famous Korean snack Choco pie, but better. We have a fluffy vanilla bean studded marshmallow sandwiched between soft cake and coated in dark chocolate.

When I was developing this recipe I realised that there is also a similar snack found in America called the Moon Pie. Similar to the choco pie it has a marshmallow filling, but between two graham crackers. I've never had one before, but such a classic combination of flavours isn't hard to imagine!

And then if you look in further (or this case into my childhood) Australia has a similar snack called the wagon wheel. Two biscuits surrounding a marshmallow and jam filling, coated in chocolate. A little bit of an upgrade with the jam, but equally as delicious.

Either way moon pie, wagon wheel or choco pie you can't compare them to a homemade version!

Improvements from the original choco pie

Choco pies were a regular in my snack cupboard, with that chocolatey exterior and squishy marshmallow centre. But they were never a favourite. There was something about the cake/cookie in the choco pie that was dry, crumbly and a little bit sad tasting. But, in the end it was a chocolate snack so who's complaining?!

Now I have the freedom to make it better.

Like I said before I wasn't a fan of the dry cookie/cake. To be honest I'm not sure if it is a cake or a cookie. It wasn't soft and fluffy enough to be cake, but it wasn't crunchy enough to be a cookie... So the first major upgrade is the cake base. I wanted to make it light and fluffy so it complemented the squishy marshmallow interior.

The chocolate that coats the pie isn't terrible, but it isn't the best chocolate. A high-quality chocolate bar to coat the marshmallow pie makes all the difference. And top that with a little flakey salt? 🤤🤤

The individual components that make up the choco pie aren't hard to make, but the assembly of the pie itself can be a little difficult. Here are a couple of tips to make an identical looking, but better tasting choco pie!

The cake batter shouldn't be so thick that it stands as a tall mound, but not so thin that it spread across the baking sheet. Somewhere in the middle!

When piping the cake batter into circles make sure to leave enough space between the rounds so that when they expand in the oven they don't touch.

Tips to get an even, thin coating all over your choco pie:

If you are ready to make a delicious, squishy marshmallow pie let's get baking! I may not be the biggest fan of choco pies, but these I love 😍

If you liked this recipe make sure to leave me a rating and comment below. Don't forget to tag me on instagram @catherine.justdessertsau and hashtag #cattycakes if you make this squishy chocolatiness. Can't wait to see them. Well that's it for now, until next time... happy baking! 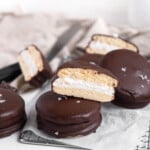