These frog shaped macarons are inspired by the cute frogs on TikTok and Pinterest. Holding a heart these froggie macarons are filled with a creamy and delicious two ingredient buttercream!

I have been in love these frogs since they started trending on TikTok. There is something about that derpy face that is so cute! These frog decorated desserts originated from Oracle Bakery in Chicago. They create the CUTEST cakes decorated in vibrant buttercream and top them with the little animals. A lot of people have been making their own versions of the cake, but I thought they would be super cute as a macaron, so here they are, Tiktok Frog Macarons!

Creating character macarons can be difficult as it requires you to layer the macaron batter. This is essential otherwise you won't be able to see the arms and legs of your frogs. Follow these tips for the cutest little froggies!

If you follow these tips you shouldn't have any problem creating the shape of these macarons!

Compound chocolate is made from vegetable oils rather than cocoa butter and when melted will set solid. If you use regular chocolate the face will never set at room temperature, and you might get that cute face smeared everywhere...

To make sure that the chocolate is compound simply check the ingredients. If you don't see any cocoa butter and see oil instead you've got the right one!

If you have access to candy melts they also work amazing!

A couple of tips to keep in mind:

Honestly, by the time I have piped out all the details on these macarons I am not getting into an elaborate buttercream. I can't bring myself to whip up an American buttercream (It's just too sweet 😅), but I need something that is smooth, creamy and delicious that isn't going to require the cooking of eggs, or making of meringue... That's how I came up with this buttercream! I'm not sure if this exists somewhere else on the internet, but either way this is a delicious buttercream that won't cause extra stress.

The only thing you need to ensure when making this buttercream is the temperature of the chocolate. It must be at room temperature before being added to the butter. That way the butter won't melt and you will have a creamy buttercream!

I hope you all love these as much I do. I can't count the number of times I called these cute as I made them... If you want to see me create these check out my vlog from this week here! I can't wait to see how they turn out for you guys. If you make them make sure to tag me on instagram @catherine.just.dessertsau and hashtag #cattycakes so I can find and share your recreations! Any questions simply leave me a comment down below and I'll get back to you as soon as I can. Until next time... happy baking! 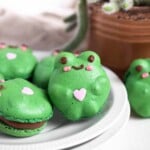 These frog shaped macarons are inspired by the cute frogs on Tiktok and Pinterest. Holding a heart these froggie macarons are filled with a creamy and delicious two ingredient buttercream!