While the rest of the world seems to be enjoying summer I'm here feeling cold in Australia. So I thought it would be fun to make some tropical cupcakes and transport my tastebuds to somewhere I'd rather be. A warm and sunny beach with a pina colada in my hand 😎

These cupcakes are my absolute favourite! The addition of coconut milk gives this cupcake an extra moist and fluffy texture, and combined with pineapple chunks and a swirl of coconut swiss meringue buttercream this is THE tropical cupcake!

Tips for the perfect cupcake

While making cupcakes might seem easy, creating the perfect cupcake is a different story! Because there are so many cupcakes out there we want to create a cupcake base that can differentiate ours from the millions out there.

The reason this cupcake is different to a lot of them out there is because of the fat ratio. Butter gives cupcakes flavour, however butter-based cupcakes go stale in a day. On the other hand oil gives cupcake moisture, but it lacks flavour. So we've got the best of both worlds with this cupcake. Made from both oil and butter this gives the cupcake a flavourful base with a light and fluffy texture that lasts for days. On top of that, the addition of coconut milk and pineapple brings extra moisture and flavour to this cupcake to create the softest and fluffiest cupcake you'll ever have.

Adding vinegar to the coconut milk brings a touch of acidity. This is needed to react with the baking soda in the batter and give the cupcakes rise

Whisk the eggs until light and fluffy

Once you add the eggs to the oil, butter, sugar mixture you want to beat them until they are fluffy and lightened in colour. This process gives the cupcakes a lighter texture.

As usual, you don't want to overmix your cupcake batter as this can lead to dense and gummy cupcakes.

How to make pineapple flowers

The flowers are easy to make, however they are a little time consuming as you have to wait for them to dry.

To make them simply slice the pineapple as thin as possible, place on a baking tray lined with baking paper and bake for 60-120 mins on 110C/230F. Make sure to check on the flowers every so often so you don't over dry them. Once done they should be mostly dry but still flexible. As they cool they will firm up.

Place the pineapple flowers in a small bowl as they cool so they take on a rounded shape and look more like a flower!

If you cut your pineapple at different thicknesses the drying time will be different for each slice so try and be as consistent as possible. If you own a mandoline this would be the best way to slice your pineapple as you can get thin and even slices. Otherwise a sharp knife and steady hand is the way to go!

When making swiss meringue buttercream there are several points you should look out for in order to ensure buttercream success!

If the sugar isn't completely dissolved it will result in a grainy buttercream. You can check whether or not it has been fully dissolved by rubbing some of the egg white mixture between your fingers. If it feels smooth then it's ready!

The temperature is also important as it ensures that your egg whites are safe to eat, while making sure the sugar can fully dissolve!

Ensure the meringue is cooled to room temperature before adding butter

If you add butter to the meringue before it has completely cooled you risk your buttercream curdling and melting. While it isn't impossible to fix (just place your buttercream into the fridge to firm up before adding in the rest of the butter), it's annoying and time consuming. Remember to test the temperature by placing your hand on the side of the bowl. It should be slightly cool/room temperature.

Adding the butter slowly gives each bit of butter time to be fully incorporated into the meringue. As we are adding a fat into the egg whites it is easy to accidentally curdle the buttercream. Adding the butter in slowly reduces the chances!

Once all you butter has been added make sure to keep whisking your buttercream for a few minutes. This adds extra air into your buttercream to create a light and fluffy frosting for your cupcakes.

Use a paddle attachment to smooth out your buttercream

While this is an optional step it ensure that your buttercream is silky smooth and free from air pockets. Using a whisk attachment brings lightness to the buttercream, but it also brings large air bubbles which can appear while piping. By using a paddle attachment it smoothens it all out, ensuring a beautiful smooth swirl of buttercream when frosting.

Not only are these pineapple coconut cupcakes so delicious and tropical, they are soooo pretty! Brings me back to the beach 🏖

If you make these make sure leave a comment and rating down below, I would love to know how it went. Also tag me on instagram @catherine.justdessertsau and hashtag #cattycakes so I can see and share your creations. 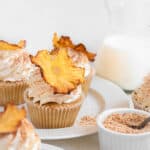