Big, soft and fluffy cinnamon rolls with a sweet gooey filling are the dream. I don't think anyone can hate cinnamon rolls. Their existence in itself is so warm and comforting, and the feeling when you bite into a freshly baked roll is like a big hug.

With so many cinnamon roll recipes out there it can be intimidating to choose one, and in my opinion most of them are amazing! The problem is how do you tell them apart? When I develop a recipe for something that is so widely made, the best place to start is with what we have!

How I developed the perfect recipe

To create this recipe I've analysed the ratios of ingredients in all the popular recipes, or recipes that I have tried and loved, to find the "golden ratio". This is a pretty basic concept in baking, as there will always be a perfect ratio of the ingredients to deliver the best result! We can use all the recipes available to us as the trials in this process to finding that ratio and find similarities in all the recipes to give us the ultimate recipe.

This is the first time I'm revealing the process behind my recipes! This is a screenshot of my final spreadsheet for finding the best cinnamon roll recipe. Before this one there were a couple more I used to narrow down the final candidates. You'll notice I've pulled some of the most common ratios, and mixed that with my knowledge of baking.

I wanted this to be a rich and flavourful cinnamon roll, so I wanted an extra egg yolk in there for more flavour and fat. I also wanted a soft and fluffy bread roll, and to achieve this the bread needs a higher percentage of sugar and hydration. And after a couple of trials of my base ratios from this spreadsheet I bring you my final version!

How to do the perfect roll

I'm sure you look at all the cinnamon rolls and think, how do they make the swirl of cinnamon so perfect? Well I'll tell you now!

How do I know when my rolls are done?

When your rolls are done they should look risen and golden brown.

To double check that the centre is fully baked, take them out of the oven and lightly pull in the side of a centre cinnamon roll with a fork. If the dough looks raw and gooey the rolls need more time in the oven.

Continue to bake them, and check again every 5 minutes. If the centre looks fluffy and bread-like then it's ready!

The type of flour you use depends on the final result you're after. When it comes to cinnamon rolls they are a cross between a cake and a bread, this results in that soft, sweet dough. However, if you want your roll to have more structure and a more bread-like consistency then use bread flour!

It all comes down to personal preference, but I would use regular flour for that classic soft cinnamon roll 😉

What happens if I add too much flour to my rolls?

Sometimes you will need to add more flour to your rolls as it is too sticky to handle, and in that case there shouldn't be any large differences in the final result. However, if that isn't the case and you've just gone overboard with the flour your cinnamon rolls could turn out drier and denser than normal.

Can cinnamon rolls rise for too long?

Yes definitely! If you let your cinnamon rolls rise for too long you can over-proof them. This can lead to dense rolls or rolls that collapse after baking.

How do I know when my rolls are ready to be baked?

You can check on your cinnamon rolls as they are proofing to make sure you bake them at the perfect time.

When you poke the rolls the dough should have a light bounce back while leaving an indent when your finger touched.

At this point the dough is ready to be baked!

Can I let these rise overnight?

Yes! Proofing these overnight is the easiest way to have soft and fluffy cinnamon rolls in the morning. After you have rolled the dough and placed it in the tin, cover it with cling wrap and place it in the fridge overnight. The next morning take them out and bake them for 35-40 minutes. You might find they take longer as they start baking at a cooler temperature. Just check on them and bake for longer if needed.

The most important part of making bread is making sure your yeast is alive! If your yeast isn't alive the bread won't rise.

Also make sure you are using the right kind of yeast. I use instant yeast in my recipe. Instant yeast doesn't need to be activated and can be added straight into the rest of the ingredients.

I'm aware that most people won't know the difference between the two and will use them interchangeably, so I've adjusted the recipe so that both active and instant will work!

Why are my cinnamon rolls tough?

There are a couple of possibilities:

Why are my cinnamon rolls dry?

Cinnamon rolls will collapse if there isn't enough structure to hold them up. This could happen if...

My filling has seeped out of my rolls!

This can happen sometimes! It depends on the temperature you're proofing them at and for how long they are being proofed. If you are letting them rise in the fridge overnight the sugar will often melt into the bottom of the pan. This can be fixed!

Once the rolls have baked flip the pan and let them cool upside down. This lets the sugar seep back into the rolls.

At this point I think I might've written a bible for the cinnamon roll... but that just means you guys have all the resources you need to create the perfect cinnamon roll.

If you make this recipe make sure to leave me a comment and rating down below, I would love to hear how it went.

Also don't forget to tag me on instagram @catherine.justdessertsau and hashtag #cattycakes so I can see and share your desserts! 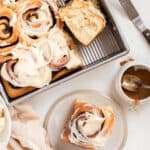